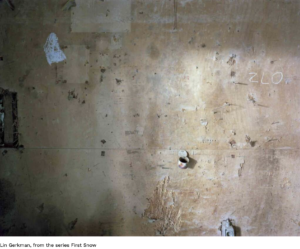 The point of departure is a disused quarry in a suburb of Ljubljana, which was formerly used to produce asphalt for a road construction company. The industrial complex consists of several sectors in different states of disuse. The area is thought to have been used for similar purposes for centuries, but the quarry began operating in a more modern form in the 1930s. From the early 1980s onwards, the site was the subject of a number of unsuccessful redevelopment plans, until the construction company succumbed to the depletion of assets by the management and a bad bank took ownership of the property. Most of the buildings of the industrial plant have since been demolished. Parts of the area have been overgrown or have become part of the public space, while the central part is still in use as a dumping ground for construction waste.

By collecting and studying found photographs, letters, minutes of meetings, online posts, professional publications, blueprints, material samples, construction elements, and other technical materials, personal objects and archival documents, and by creating my own photographs of the material traces in the landscape, Gerkman is exploring the social and environmental consequences of the transition from a socialist economic system with workers’ self-management to a market economy with strong tendencies of individual actors towards the rapid accumulation capital. He maps the period of political and economic transition through the imprints it leaves on the economy, on workers’ lives and on the environment.

Lin Gerkman (1995, Slovenia) graduated in Industrial Design from the Academy of Fine Arts and Design in Ljubljana, where he is currently pursuing his Master’s degree. In addition to design, he works in the field of visual arts. His work is concerned with finding meaning in found objects and everyday situations. He explores current events and the remnants of contemporary history that shape them. In doing so, he employs a wide range of found objects and archival materials, either as a starting point for creating entirely original works or by combining them into new composite wholes. He is interested in understanding the individual’s relationship to the home, the impact of social transitions and the relationship between the political and the private.