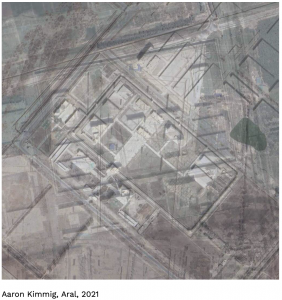 Instead of Being Omniscient

The exhibition at Photon Gallery Vienna presents works by the winner of the 9th consecutive edition of the Different Worlds 2021 Open Call, Aaron Kimming. The call is open to young photographers up to 35 years of age working in the field of contemporary art photography from the region CEE. The first prize is the production of a solo exhibition in the following year. Aaron Kimmig convinced the international jury with his cleverly conceived and executed project Xinjiang Sentinel-2 (2021). The conceptual basis of the project is rooted in the critique of human rights violations in the context of AI technology, geopolitics, state oppression and dictatorship or, as he calls it, the “dictatorship of algorithms” in relation to the Muslim Uyghur minority in China, visually articulated through publicly available satellite images.

The current solo exhibition Instead of Being Omniscient presents his award-winning project together with two others that deal with similar themes and give an insight into the artist’s practise. These are primarily concerned with questioning the use of technology, near constant surveillance and highlighting the imbalance of power structures that range from the private sphere of the individual to complex geopolitical affairs. Aaron Kimmig’s work thus addresses the realities of control and abuse of power that arise from data collection and the dominance of algorithms. The works on display show the dark side of technology and aim to create a space for the recognition of social injustices, war crimes and our (un)voluntary consent to AI technologies, while demonstrating the potential of art as an instrument for social commentary and visual activism.

In the aforementioned winning project Xinjiang Sentinel-2 (2021), the artist refers to the increasing use of algorithms by the Chinese authorities to suppress and control the Muslim minority, often leading to their detention in internment camps. On the other hand, algorithms and satellite imagery help document cultural destruction and human rights violations by the Chinese state. The project charts the growth of these camps and the destruction of cultural heritage in Xinjiang using publicly available satellite images/photos that Kimmig overlays into abstract compositions. The original satellite images of the detention camps can be found on his website https://dc.nanu-c.org/.

The 54 Days of War and Ongoing (2022 – ) shows the role of modern technology and social media in documenting war crimes and disseminating such images/information. In contrast to World War II, war crimes and acts of war in Ukraine are documented by the local population in the form of photos and videos uploaded to social media. The programme “54 Days of War and Ongoing” collects photo material and information, extracts the geo-position, searches for freely available satellite images from ESA’s Sentinel project and stacks them into a file for each day of the ongoing war. It then calculates the difference between each layer of satellite images. With a little manual intervention, the abstract, stone-like tiles are the result of a long process of thinking, coding, discussing and consternating.

The work Speak to the Ear (2018 – 19) accompanies both photo-based projects and is a reflection on the voluntary self-surveillance we can observe with a range of modern technologies we use every day. Speech is often transcribed in real time to control the smart home, and recorded voices are used to enhance AI. The ear listens and eavesdrops on sounds, distinguishes sounds into voices and pays attention to what is being said. The ear picks up on words, interprets them and relays it to Google. The ear then answers in the form of a transcript.

Aaron Kimmig (1989, AT) graduated in International Development from the Main University of Vienna in 2019. In 2017, he embarked on postgraduate studies in Post-conceptual Art at the Academy of Fine Arts, Vienna, and has been working at the self-organized webdesign/full-stack development collective convive.io since 2016. His work is focused on society, technology and representations of nature. He exhibited in various solo and group